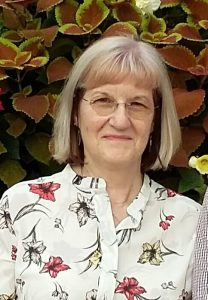 What a memorable meeting! It was serendipity that we chose to have a Commonwealth evening during Tangent’s 53rd birthday year as there are 53 voting counties in the Commonwealth. We enjoyed good company and excellent food from various countries around the world. The sun was shining so we ate al fresco until a cool wind persuaded us to go indoors.

The timing was perfect, Jennie had been keeping us up to date on the football match although we knew when England had scored a goal from the roars of jubilation that came from the neighbouring houses. As we went inside the match had reached the penalty shootout. I was surprised to see so many ladies sitting or standing watching the tense final minutes of the match. Everyone left the meeting on a high having enjoyed themselves and, more likely, because England had won.

I would like to say a big thank you to Jenny Chapman for all her help and support before and during the meeting and to Pearl for organising the notices, taking numbers and sorting out the finances.

I must not to forget to say a very big thankyou to David for all his help and support during the day and evening. He and his fellow volunteers at Amerton Railway did get to enjoy what was left of the huge chocolate cake that Mary had brought.

The August meeting is Archery on WEDNESDAY 8th August; they don’t do Tuesday evening. Unfortunately I won’t be there as my sister is having her 70th birthday party on that day and she had forgotten to invite us, oops J

I hope lots of you can support the meeting and have a great time.